Penrith was first inhabited by the Aboriginal Darug Tribe with many descendants still living in the area today. In 1770 Captain Cook landed on the shores of Sydney’s Botany Bay. Eighteen years later in 1788, Captain Phillip established the first European settlement at Sydney Cove.

In the following year 1789, Captain Watkin Tench of the Royal Marines lead a party west of Parramatta to the foothills of the Blue Mountains. They came across a river described as being "as broad as the Thames at Putney and apparently of great depth, the current running very slowly in a northerly direction".

The river was named the Nepean River after Evan Nepean (the Under Secretary of the Home Office in Britain who was involved in the organisation of the first fleet). Following settlement, the district became known as Evan and rapidly developed in agriculture to produce food for the Sydney Colony.

The area across the river, today known as Emu Plains was originally restricted to the general public. It was in Emu Plains a government farm was established by Governor Macquarie.

After the impassable Blue Mountains barrier was first crossed by Blaxland, Wentworth and Lawson in 1813, public access was soon permitted across the Nepean River in 1815 following the building of the road across the Blue Mountains. Emu Plains was apparently named after the sighting of Emus roaming the area, however, there are no emus to be seen today.

While Castlereagh was declared by Governor Macquarie in 1810 to become one of the primary areas for development, due to the new route west to the Blue Mountains, the focus shifted south along the river to Penrith.

Penrith became a stop over and starting point for travellers west bound. The name Penrith, first recorded in 1822, may have been named after Penrith in Cumbria England, although details are a little sketchy. This town is also set on a river with a backdrop of hills. 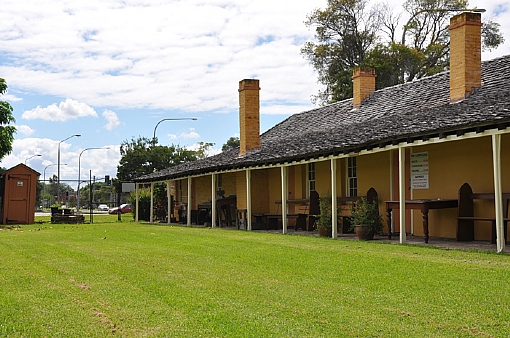 Penrith really came alive with the introduction of the railway line in 1863 serving as a major railway town until the First World War. The town experienced major expansion during the Second World War with the establishment of several military depots in the area.

Penrith rapidly expanded during the 1970’s with a major building boom, continuing to the present day to a population of over 185,000 (Census 2011) people. Penrith is now a major city being the CBD for the Hawkesbury Valley and Blue Mountains areas. 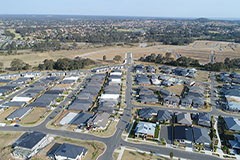 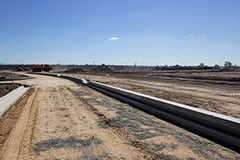